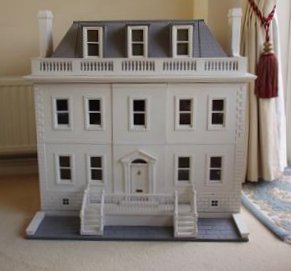 Sue, from Berkshire, owns two beautiful doll’s houses, and has been making up miniature needlepoint kits of mine for several years.

She says, “I have been a big fan for many years now and know that whichever kit I purchase will fit into my houses somewhere. It was interesting to see the rooms in photo format as it was the first time I had taken them and I felt I had shrunk myself into the rooms – I can see where there are big gaps now! Both of the houses were made by my father who loved making miniature models. After he retired he thought he would try making houses to sell but quickly realised that with the amount of detail he wanted to include they would never pay. I don’t think the photos do them justice as so much was cut by hand; even the floor boards were all cut strip by strip. Unfortunately he died before he completed the larger one and it has always been a regret that he was never able to see it furnished. I like to think he is looking down and able to admire it!” 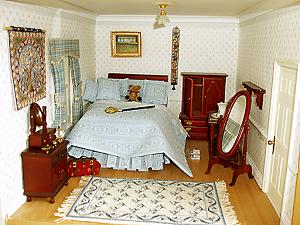 In this lovely feminine bedroom, decorated in shades of blue and white, are a VERONICA (BLUE) carpet at the foot of the bed, a TREE OF LIFE bellpull hanging on the back wall, and an ORANGE TREE wallhanging to the left. 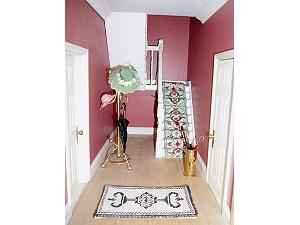 ALISON (CHARCOAL) is the small rug featured in the hallway of Sue’s first house, with a CAROLE PASTEL staircarpet on the staircase that leads to the first floor. 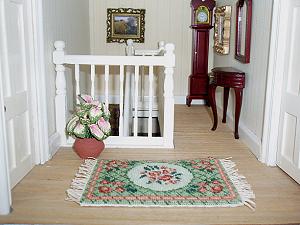 A BARBARA SMALL (GREEN) carpet fits neatly on the landing on the first floor. 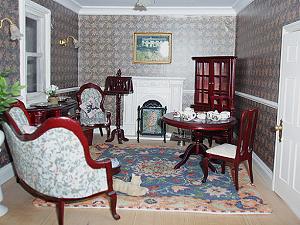 The ELIZABETH carpet, a square William Morris ‘Hammersmith’ design, looks stunning in this living room, papered with authentic twelfth scale William Morris wallpaper. There is a BELLA cushion on the armchair to the left (with another one just peeping over the sofa), and a LITTLE OWL firescreen on the hearth. 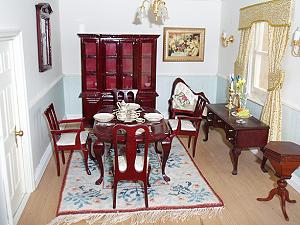 This smart dining suite stands on an ELEANOR carpet. In the background, on the chaise longue, is a CAROLE PASTEL cushion. 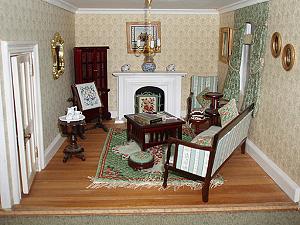 This elegant sitting room has several items in the ‘Barbara (green)’ range, such as the LARGE CARPET, several CUSHIONS, and a footstool. The ‘Strawberry Thief’ needlework stand is no longer available, either). There is also a firescreen in front of the fireplace, in the SUMMER ROSES design, with a painted frame that exactly matches the shade of the carpet, and looks very smart. 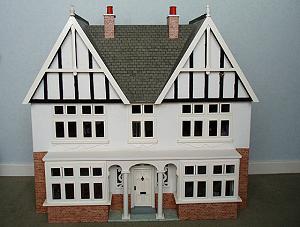 The view from the front of Sue’s second doll’s house. 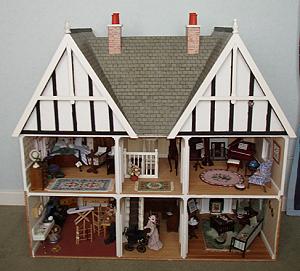 This image of Sue’s second doll’s house gives a good view of all the rooms together. 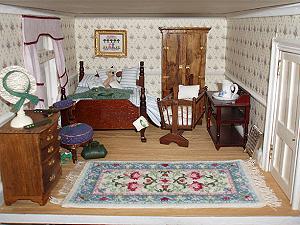 The touches of pink in the floral wallpaper are picked up again in the peonies of this William Morris carpet, called CAROLE (PASTEL), which is one of my most popular carpet designs, worked on 18 count canvas. 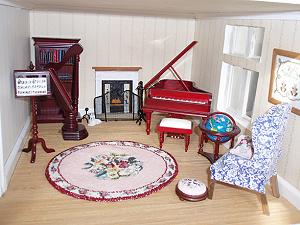 A BELLA carpet takes pride of place in Sue’s music room, with a matching cushion on the armchair. A Bella footstool also looks good in this room.