[Reproduced from an article in the Dolls House World magazine, issue 89 Feb 2000] [Originally screened on 19 August 1999]

Have you ever wondered what it’s like to appear on television? For most people, it’s something that they wonder about, but my husband Chris and I recently got the chance to find out what it was really like. We had recently moved (both house and embroidery kit business) from Essex to the Peak District, and felt that a bit of publicity wouldn’t come amiss. So we contacted our local Business Link Centre, and got put in touch with the local newspaper The Sentinel which ran a feature on us and ‘the amazing world of miniatures’. The article appeared in colour and a lot of interest was generated, but it was what happened as a result of the article that was really amazing.

A couple of days later the phone rang, and when Chris answered it, he calmly took the message, held out the phone to me, and said: “it’s Central Television News for you.” Someone had seen the feature in the local paper and thought that it would make a fun item (you know, that always appears at the end of the news). They had no idea about miniatures at all, and seemed bemused by the thought of a bunch of grown-ups owning dollhouses. However they were still keen to do an item on our business, so we made an appointment for them to come down the next day, a Tuesday. 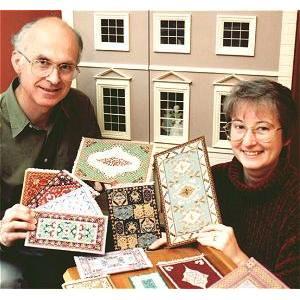 Picture printed in ‘The Sentinel’ newspaper

Now we aren’t particularly houseproud (too busy for that) so we spent the next few hours tidying up, moving my dollhouse downstairs (as the light is better there), and replacing all the miniatures in it.

The television crew were due to arrive at 2pm on Tuesday but at 1pm we had a phone call. Apparently there was a demonstration over male calves being uneconomic to take to abattoirs that had suddenly become news-worthy (cows are very big news here), so the appointment was postponed until the Wednesday “No, of course we don’t mind.” Wednesday morning, we were less edgy because by now we expected it to go wrong, and it did. Calves were now being abandoned at an animal rescue sanctuary – much bigger news than ‘miniaturist couple escape from Essex to Staffordshire’ so the interview was postponed for another day.

Thursday morning, we carried on with packing orders, assuming that by now the television company would be losing interest too. But at 2pm prompt the doorbell rang and a very young female reporter asked us if the cameraman had arrived yet. The reality dawned that we would actually have to be filmed, saying sensible things and moving about, stuff like that. I suddenly remembered that I don’t like having my photo taken, let alone appearing on film. Bit late now though. We hastily explained to the reporter that we are a full-time manufacturing business, and just happen to be in the field of miniatures.

We could hear her musing to herself that it might be fun to film us playing with the dolls house, or whatever it is that we do. She was insistent that one of us should be filmed stitching (despite the fact that we only ever get the time to stitch while at shows, when we are nowhere near our computers). Chris nominated me, but I nominated Chris, and as the idea of a man stitching seemed a much more outlandish thing to film, I won, and Chris had to go first. You’d think it would be easy being interviewed, wouldn’t you? They ask you things and you reply while somebody else films it. Unfortunately it wasn’t like that.

“Right then, in a minute I’m going to ask you if it is easy to sew and you’re going to say that yes, it is, and then explain how to do it, while the cameraman films you stitching as you talk. Try to remember to smile. Don’t look at the camera, look at me. Keep it brief but not too brief, about twenty seconds will be fine. Oh, and look relaxed.” Actually Chris managed it really well, and only I could tell that he was tense (because his Cornish accent comes out more then).

When it was my turn, I had to explain, in the strict twenty second time limit, how I started the business and why and what my customers tend to be like, and how I see the business expanding in the near future. By the time the reporter had finished asking the question, I had forgotten what the beginning had been. She kept saying things like, “fine, but shall we try that one more time?” I then had to be filmed packing kits, which is difficult to concentrate on when you have a cameraman lying on the table in front of you, saying: “Just pretend I’m not here.” When they eventually finished filming us, they turned their attention to the stitched models, and took about two hours filming extreme close-ups of the carpets, footstools and needlework stands. 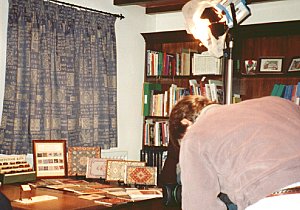 After three hours of filming, we realised that they were starting to pack up, and talking amongst themselves about how bad the traffic would be on the run back to Birmingham. Just as they were leaving, the reporter asked if she could use our phone to contact the music library back at the television centre, to book some ‘relevant background music’. We overheard her asking for “something Upstairs Downstairs-y parlour music, posh and victorian”. We had no idea how the item would turn out, or even when it would be broadcast, as it was obviously a ‘filler’ item, so could be postponed (the story of our life!) at any time.

After avidly watching the Six o’clock News for the next three days we were still stunned when they eventually showed it. It had been edited really well – the parlour music background was just right, the interviews were mercifully brief. I actually sounded like I was making sense (although I never realised my Essex accent was THAT strong!), and the close-ups of the stitched models came out really classy. Five minutes after the item went on air the phone started ringing. The interest that one and a half minutes on television can do was incredible. If we get the nerve, we might even risk it again one day.