Doesn’t time fly? January 2016 sees the twentieth anniversary of my doll’s house embroidery kit business, Janet Granger Designs. In this feature, I’ll show you some of the milestones of those twenty years (and some rather strange fashions in clothes and glasses, in that time, too!).

My miniature needlepoint kits enable you to stitch all kinds of beautiful and simple to make soft furnishings for one twelfth scale doll’s houses, to be stitched on fabrics from 18 count canvas down to very fine 40 count silk gauze. These days, I tend to feel that I have been doing this for ever, but it wasn’t always like this!

In my ‘previous life’, I used to work in a library. I’d started there aged 16, and never expected to still be there in my early thirties. I enjoyed it at first, but it became really dull, and I eventually wanted a change. I’d always wanted to be self-employed in some form, and when I met my husband, Chris, in 1991, his enthusiasm for my doll’s house hobby, and his technical skill in computers and photography completed the necessary skills base!

I wrote my book ‘Miniature Needlepoint Carpets’ before the actual business got properly off the ground – I had replied to an advert from the Guild of Master Craftsmen publishers, who were looking for authors of miniatures-related books.

My book was published in 1996 (now out of print), and kits from those 25 designs followed soon after. 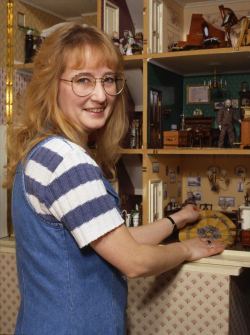 This is me in front of my doll’s house – this image was taken for use in the Dollshouse World article, 1996

I had the good luck to have an article written about me for Dollshouse World magazine, just as I was starting the business, and their official photographer came to my house and took a set of images, including this one of me in front of my own doll’s house. The article got me a lot of publicity, which was very helpful when I was just getting going. 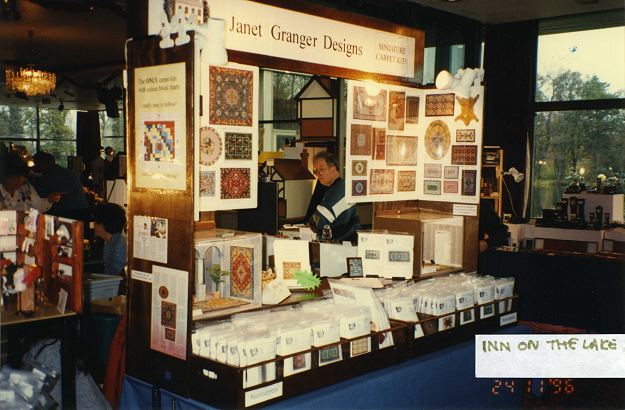 My first stand, at the Inn on the Lake Fair

The first time we had a stand at a doll’s house fair was at the Inn on the Lake in Kent, in March 1996.  Wow, I was nervous! We had spent weeks making our stand – a very clever slot-together affair, that all fitted inside a Ford Fiesta (just!). We’d never sold directly to the public before, face to face, and didn’t think we’d be able to do it. But once we started, it was easy – and very enjoyable. I still love talking to my customers, when I get the chance – but these days, it’s much more likely to be by email, as we no longer attend any fairs. 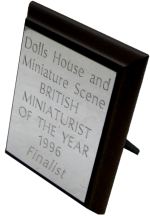 The ‘Miniaturist of the Year Finalist’ award from 1996

I advertised my new business in all the UK doll’s house magazines, including Doll’s House and Miniature Scene. At the end of 1996, I was nominated for their ‘Miniaturist of the year’ competition, and was very excited to get through to the finals. I’ve still got the little plaque that I won, for reaching the final four. 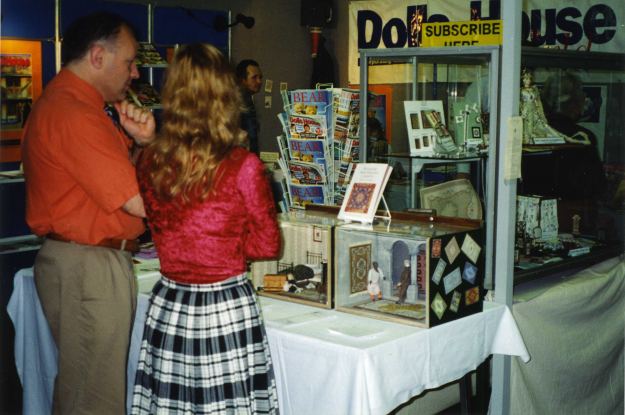 Barry King, editor of Dolls House World in 1997, talking with me at the Dollshouse World stand at Alexandra Palace

We started to attend the larger doll’s house fairs in 1997, including Marion Fancey’s Fairs at Alexandra Palace in London. That was a very prestigious event for us. As part of the Fair, Barry King, the long time editor of Dollshouse World magazine, had a display on his stand of my book, with two of our roomboxes that my husband had made to publicise stitched up examples of the carpet kits that were by now selling like hot cakes at every show we attended.

After a couple of years of doing the weekend doll’s house fairs, the business was getting so busy that I was struggling to manage it on my own. Chris helped at the shows, but all the making of the stock, computer work and accounts was getting to be too much just for me on my own. During one show, at the NEC in Birmingham, we talked it over and he decided to leave his full-time teaching job, to work with me in the business. I clearly remember him going from our stand to the bank of public telephones at the edge of the hall (this was before everyone had their own mobile) to phone his headmaster to say that he was leaving. 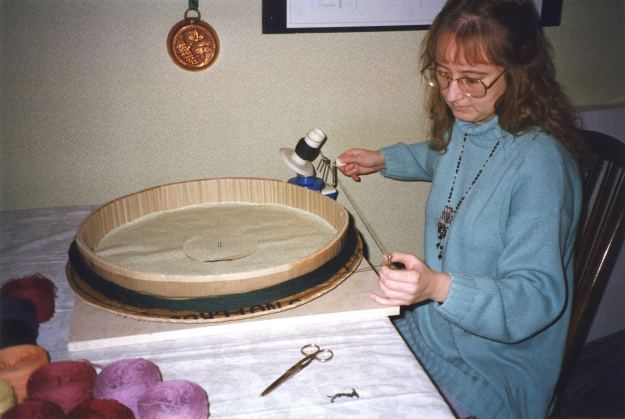 When I was searching for pictures to use to illustrate this feature, I came across this one, which I think is really funny – it’s me in about 1998, winding wool from a hank into a ball, on a home-made ‘hank unwinder’ that Chris made for me, so that I could make the skeins for the carpet kits quicker. It looks really basic, but worked really well. It was supposed to be a temporary fix. Would you believe, I still use that?! When we used to attend the stitching shows, the other standholders used to call us ‘Mr and Mrs Cardboard’, because everything we used to assemble our stand seemed to be made from cardboard, just like this hank unwinder. 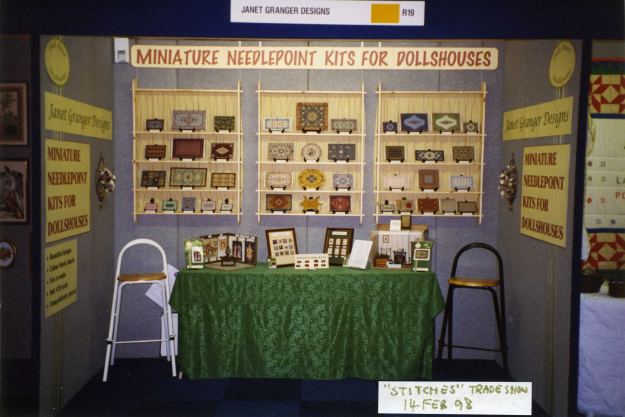 The trade stand, showing all the stitched models for the carpets that I had in my range at that time, 1998

We felt, after a few years of running the business, that we would like to sell more through shops, as well as doing mail order ourselves, so in 1998 we applied to attend ‘Stitches’, which at that time was Europe’s largest stitching trade show – and very difficult to get into, as they had a long waiting list for stands. But we got in, as we only needed such a tiny space – two metres by 1.5, the smallest stand in the show! We didn’t have enough space on our stand to sit down, but at least we were being seen by the trade visitors! 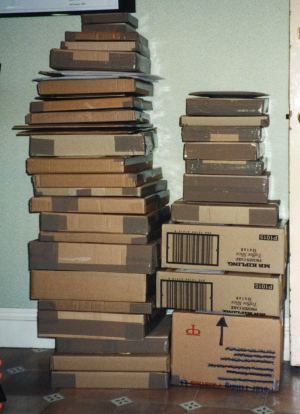 The heap of parcels ready to be shipped out, after the first trade show

We did really well at our first trade show there – during the week after it, I made up dozens of trade parcels, to be sent all over the world. Eventually, we were to have over 200 UK stockists, and around 40 international ones. 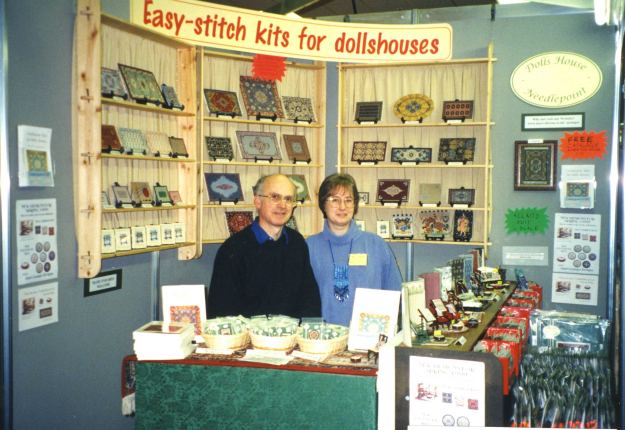 Olympia April 1999 – this was the (very small!) stand that I used to hide under, to study for my Open University course!

We settled into a pattern of doing shows most weekends, doing the shopping, housework and kitmaking on Mondays and Tuesdays, and driving off to the next show on the Wednesday for four days (stitching shows tend to be four day affairs, rather than just at weekends). Of course, it was very tiring – I wouldn’t be able to do it now! Not enough energy! And at that time I was also studying for an Open University degree in Social Science and Criminology. Often, I’d sit under the stand at a show, out of sight of the public, so that I could catch up on my studying, and if people asked my husband at the stand where I was, he’d claim he didn’t know where I was….. 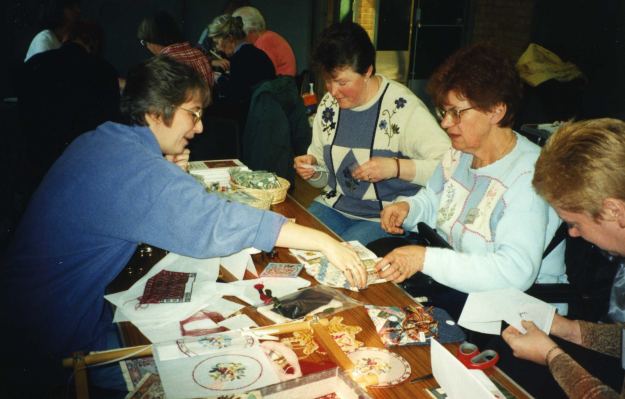 This is me teaching at a doll’s house workshop, 1999

On top of doing shows regularly, I also took part in some doll’s house workshops, teaching beginners and more experienced stitchers how to make my kits. It was great fun, but very tiring, I seem to remember!

In 1999, we moved from Essex to Staffordshire – quite a complicated job, when you have to move a business, and tell absolutely everyone that your address has changed. 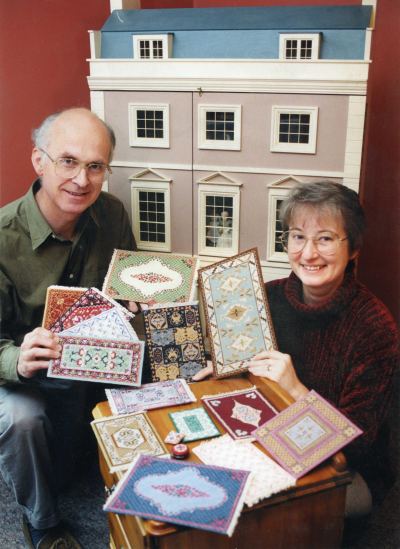 Chris and me holding stitched models of some of my carpets, in front of my doll’s house, 1999

A few weeks after moving, we contacted the local paper, to get a bit of publicity, and managed to get a large article about ourselves as ‘southerners’ who’d moved ‘up north’ with our specialist business. Here’s the picture that accompanied that article.

But what happened next was really funny – a journalist at the local paper contacted the BBC, and we ended up as the ‘cat up a tree’ kind of story at the end of the news!

We had a film crew come round to our house, and they interviewed both me and Chris – particularly Chris, as they thought it was funny to interview him while he stitched. I’d taught him how to stitch at one of the fairs we attended, as we thought that if he could stitch in public, it would attract attention (we were right – it did!). 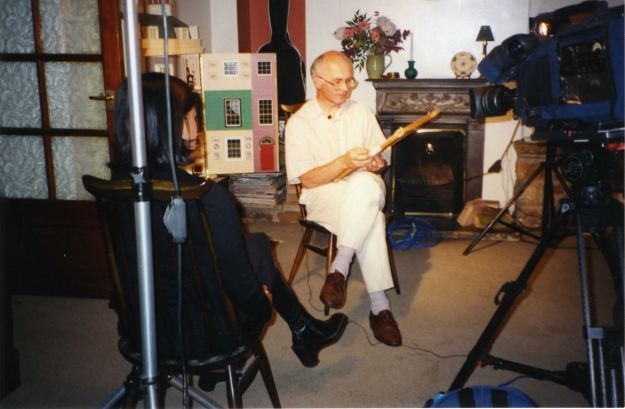 My husband Chris being interviewed for TV, whilst stitching, 1999

So, Chris’ 15 minutes of fame was of him on national television, stitching in front of a doll’s house.

Since early 1997, we’d had our own website. In fact, we were one of the very first UK craft businesses to have a website. This picture, of me with very yellow hair, was actually a publicity shot, to prove how technologically up to date we were. Look at the size of that monitor! 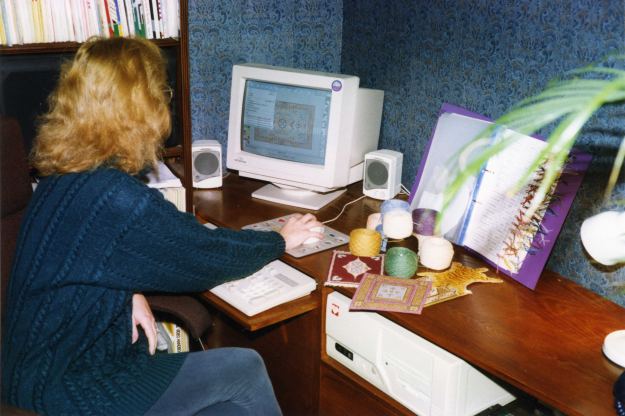 We went on a course for micro businesses on how to make the most of the internet, before there was even much internet to make use of! Chris learnt how to design a website in raw code (in fact, he’s done that as an extra business ever since), and once we had what a BusinessLink advisor called ‘our very own web page’ there was no stopping us. In 2004 we even managed to get through to the final 10 for the North West of England’s section of the national E-Commerce awards. 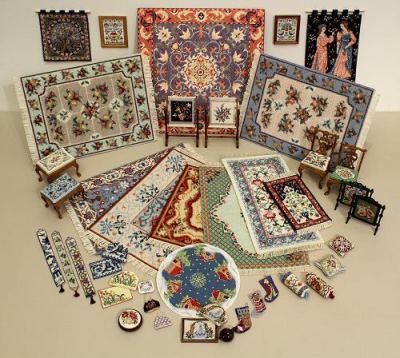 For the next few years, I worked hard to expand the range of doll’s house needlepoint kits – bringing out kits for carpets, cushions and footstools first, then diversifying into more complicated things such as dining chairs, bolster cushions, handbags, and so on. I’ve still got loads more ideas than the time to work on them, but I’ll get there one day!

Since 2009, I’ve also had a blog, which I do ‘all on my own’, with no input from Chris, I’ll have you know! I love doing my blog, and post every Thursday. I don’t just post about miniature things. I tend to post about whatever I’m stitching, or whatever craft book I’ve been reading, for instance. 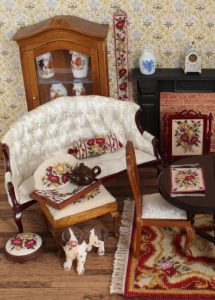 Our emphasis for the business these days is very definitely internet-based. We pride ourselves on having a really accessible, up to date and easily found website. Our website now is huge – almost 200 pages, full of products, tutorials and images of finished stitching sent to us by our customers. I don’t attend any fairs now, and haven’t for several years. I find I can reach my customers all over the world through the internet much better than I ever could by attending a few shows per year. I have an Etsy shop, as well as my main website, and I’m also on Facebook and Pinterest  too.

I still love what I do, and can’t imagine working as an employee for anyone else – I think I would be unemployable, now!! I love the flexibility of working for myself too much. I’ve got so many mini stitching ideas to bring to fruition, that I can’t see me stopping any time soon!

[NB: A shorter version of this article appeared in issue 58 of the Artisans in Miniature online magazine in January 2016]